Termites rank as one of the most destructive insect pests in the world and are classified as invasive insects. They wreak havoc on the bones of your home and cause more than $5 billion in damage annually in the United States alone. Formosan subterranean termites cause 1/3 of the total damage created by invasive insects and only exist within 40 degrees north and south of the Equator. As residents of Southeast Georgia, we reside in a hot spot for Formosan termites, making the thought of not staying up-to-date on your termite protection and warranty a terrifying one. 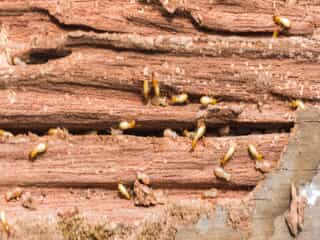 Not all termites are created equal. There are 3 different types of termites –Drywood, Dampwood and Subterranean. Subterranean termites include the Formosan variety and as their name implies, they infest homes from the ground up; directly into damp or damaged wood; or through mud tubes they’ve constructed along concrete foundations or in crawlspaces.

In Southeast Georgia, we focus on Eastern Subterranean and Formosan termites as they cause the most destruction in our area. It’s important to note a few key differences between the 2 species:

Termites have been causing damage and destruction in the United States and North America since well before the Europeans arrived. There is even fossil evidence that they existed during the Cretaceous period. It’s clear that they aren’t going anywhere anytime soon! Termites cause more damage every year than earthquakes, house fires and hurricanes combined. And homeowner’s insurance doesn’t cover termite damage. That’s where we come in. We’ve been serving Southeast Georgia since 1928 and are proud to provide the best termite warranty in the industry.

Termites are commonly mistaken for carpenter ants. Not sure what pest you’re dealing with? Look for the following differentiating characteristics:

Termites eat wood from the inside out to build their colonies, so you may not even know you have them until your home has encountered significant structural damage. A mature colony will have a large number of feeding and nesting sites all connected by tunnels. One single colony can consist of more than a million termites and can spread across half an acre of land. These pests may be small but they are incredibly mighty and destructive!

Termite control requires the skill of a professional. In order to eliminate termites, specific equipment and pesticides are required and the only sure-fire way to do this is with professional treatment.

Don’t leave one of your most valuable possessions vulnerable to a termite infestation. Be sure to maintain your termite protection year after year or consider adding it. When it comes to termites in Southeast Georgia, it’s not a matter of “if” but a matter of “when”. Contact us for a free termite inspection and to determine which treatment program best meets your needs.