Imagine this: you walk into your kitchen in the middle of the night and staring back at you is a giant nasty cockroach! You immediately feel startled and probably disgusted, and your mind starts to worry about how big of a problem you have. Are there more? How did it get in? Do I have an infestation? You grab your laptop and Google “I have cockroaches!” and the results show that there are 2 common cockroach species in our area: German and American. Now your worry develops into deep concern because you do not know how to identify what kind of cockroach you are looking at. Lucky for you, Yates-Astro is here to help! 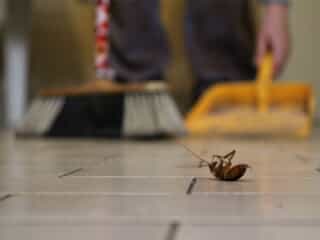 Where Do Cockroaches Come From?

It is important to understand that cockroaches are a big problem to any home they invade. A clean home is still susceptible to cockroaches, because all their necessities to survive are the same as ours: food, water and shelter. But why are they a problem? Read on …

Cockroaches can trigger allergies in many and they transport several different diseases. Getting rid of these pests is not an easy task, and multiple professional pest control treatments are required to get any cockroach invasion under control. Mitigating an infestation is not a one-and-done deal! This is one of many reasons why recurring pest control services at your home are so important in our area.

These nuisance pests can survive in the harshest conditions and they also breed rapidly. Eliminating German or American cockroaches effectively starts with properly identifying which species you are dealing with. Providing this information to your pest control technician allows them to decide which treatment method is right for your pest problem.

What Type of Cockroach Do I Have?

There are 4 things to check to correctly identify which species of cockroach you have roaming around your house:

Both species will eat just about anything available to them.

Whether you are dealing with American or German cockroaches, it is close to impossible to starve roaches to death.

Whether you are dealing with American or German cockroaches, it is nearly impossible to starve roaches to death. This is because getting rid of everything a cockroach wants to eat is a task that may never be achievable. Fun fact about cockroaches – even if you manage to completely isolate them from food, that will not be enough to make them perish. Cockroaches can live for one month without food because they are cold blooded. Their bodies are able to store food and provide energy over long periods of time. If you are trying to starve them out, start with depriving them of water. They can only survive up to one week without it.

These cockroaches consume anything that is available to them. Some even eat hair, paper, cardboard and cloth. They are particularly fond of things that are decaying, such as yard debris, fungi, and smaller insects. When they make their way inside your home, they will target crumbs and sweets on the floor as well as under appliances. Kitchens beware!

Just like the American cockroach, this species eats just about anything… including garbage. These creepy crawly pests are especially fond of sweets, grease, and different meat products. Because of this they are commonly found under/behind/in various kitchen appliances. German cockroaches are also known to eat book bindings, food crumbs, soap and toothpaste.

German and American cockroaches have subtle differences in their appearance that set them apart from one another. The most notable difference in appearance is their color.

Size is a big indicator of which species you are dealing with. German and American cockroaches have subtle differences in their appearance that set them apart from one another

This species of cockroach is the largest in size in the United States. They grow anywhere from 1.5 to 2 inches in length. Their body is reddish-brown and their thorax – where the legs and wings are attached – is yellowish in color. American cockroaches have very strong wings, so it is possible to see them flying around from time to time especially at night.

The breeding habits of German and American cockroaches are very different. Both species are able to produce offspring rapidly, but there is a big difference between how their eggs are carried and the number of offspring they can bear per year.

The breeding habits of German and American cockroaches are notably different. There is a big difference between how the eggs of each species are carried and the number of offspring they can bear per year.

American cockroaches can bear up to 800 offspring per year. Although this number is quite large, it is nothing compared to that of the German cockroach. In regard to their eggs, female American cockroaches glue their egg capsules onto suitable surfaces and cracks within the same day that they were formed.

Where you physically find a cockroach is helpful in determining its species. Curious as to why? Read on.

American cockroaches prefers to live outside. They start to invade Lowcountry homes when they are actively seeking food, water, and shelter. When they do make their way inside your home, they are usually found in the dark and damp parts of your house. Examples of these areas include:

The location where the cockroach is found can be very indicative of its species. German cockroaches prefer the indoors, while American cockroaches are more typically found outside.

German cockroaches prefer the indoors, which is why they are most found inside Lowcountry homes. This species is most attracted to warm areas and they gravitate to appliances to make a home. Do not think you are in the clear if you check under appliances and do not find any roaches. They also love living in the seals of appliances, behind the control panels, and behind the appliances themselves.

German roaches also hide in unchecked crevices in walls around your home, and often hitch a ride inside on items brought into your home from infested sites. Examples of these items include: Boxes, backpacks, bags, and suitcases.

A cockroach invasion of any kind is not an issue to be taken lightly. Both American and German cockroaches are a threat to your family’s health and to your home. Treatment for an infestation will vary depending on the species, but ridding your home of cockroaches is not a DIY task…it truly requires the work of a trained and certified pest control professional. German cockroaches are very common in our area. They tend to be a much bigger problem than American cockroaches because they frequently invade homes and breed at an incredibly rapid rate in a very short period of time. To learn more about German roaches or to keep your family protected by calling Yates-Astro today.

If you have a current infestation with American or German roaches, we can help. If you want to prevent one from ever happening…we can help with that too! Call 912-513-3425!